BRITE-Constellation is an international space astronomy mission consisting of a fleet of 20x20x20 cm nanosatellites dedicated to precision optical photometry of bright stars in two photometric colours. The mission continues in full science operations, with 22 data releases to BRITE target PIs having already taken place, and many datasets available in the public domain from the BRITE public archive.

The BRITE mission is a collaboration between Canadian, Austrian and Polish astronomers and space scientists. The Canadian partners represent University of Toronto, Université de Montréal, Bishop’s University, and Royal Military College of Canada. The mission was build and is operated by the University of Toronto Institute for Aerospace Studies Space Flight Lab (UTIAS-SFL). The Canadian Space Agency funded the construction of the Canadian satellites, and continues to fund mission operations.

The 3rd conference devoted to presentation of BRITE-Constellation science and technical results took place from 7-11 August 2017 at Auberge du Lac Taureau in Québec, Canada. Thirty-two participants attended and delivered oral and poster presentations. The proceedings will be published by the Polish Astronomical Society.

There are five operating BRITE satellites in the Constellation, collecting data on various sky fields in a coordinated programme to obtain well-sampled, longterm continuous (~6 months) light curves in both red and blue bandpasses.

As this issue of Cassiopeia went to press, here was the status of the sky assignments for the BRITE cubesats:

The BRITE Constellation observing programme from early 2017 through early 2019 has been planned by the BRITE Executive Science Team (BEST), and details are available on the BRITE photometry Wiki page.

“The variability of the BRITE-est Wolf-Rayet binary, γ2 Velorum I. Photometric and spectroscopic evidence for colliding winds” (Richardson et al. 2017, MNRAS 471, 2715):
Richardson et al. report the first multi-colour precision light curve of the bright Wolf-Rayet binary γ2 Velorum, obtained over six months with BRITE-Constellation. Combining these data with a huge new database of high-resolution optical spectra of the system, the authors revise the spectroscopic orbit and constrain the bulk properties of the colliding winds. We report a dependence of both the light curve and spectral line excess emission properties that scale with the inverse of the binary separation. Based on their analysis of the spectroscopic properties in combination with the photometry, they conclude that the phase dependence is caused only by excess emission in the lines, and not from a changing continuum. They also detect a narrow, high-velocity absorption component from the He I λ5876 transition, which appears twice during the orbit. Using smoothed-particle hydrodynamical simulations of the colliding winds (Fig. 1), the authors accurately associate the absorption from He I to the leading and trailing arms of the wind shock cone passing tangentially through the line-of-sight. The simulations also explain the general strength and kinematics of the emission excess observed in wind lines such as C III λ5696.

Fig. 1: Density (left), temperature (center), and line-of-sight velocity (right) of the hydrodynamic simulation of the colliding winds in γ2 Vel. The plane shown is rotated and inclined from the orbital plane such that the observer is directly to the right of the frame. At this phase, the WR star is on the right. The orbital motion is counterclockwise. From Richardson et al. (2017).

“Short-term variability and mass loss in Be stars III. BRITE and SMEI satellite photometry of 28 Cygni” (Baade et al. 2017, A&A, in press):
Baade et al. report that, for decades, 28 Cyg has exhibited four large-amplitude frequencies: two closely spaced frequencies of spectroscopically-confirmed g modes near 1.5 c/d, one slightly lower exophotospheric (Štefl) frequency, and at 0.05 c/d the difference (∆) frequency between the two g modes (See Fig. 2). This top-level framework is indistinguishable from other Be stars, including η Cen. The circumstellar frequency is the only one that does not seem to be affected by the ∆ frequency. The amplitude of the ∆ frequency undergoes large variations; around maximum the amount of near-circumstellar matter is increased, and the amplitude of the Štefl frequency grows by some factor. During such brightenings dozens of transient spikes appear in the frequency spectrum, concentrated in three groups. Only eleven frequencies were common to all years of BRITE observations. They conclude that Be stars seem to be controlled by several coupled clocks, most of which are not very regular on timescales of weeks to months, but that function for decades. The combination of g modes to the slow ∆ variability and/or the atmospheric response to it appears significantly nonlinear. Like in η Cen, the ∆ variability seems the main responsible for the modulation of the star-to-disc mass transfer in 28 Cyg. A hierarchical set of ∆ frequencies may reach the longest timescales known of the Be phenomenon. 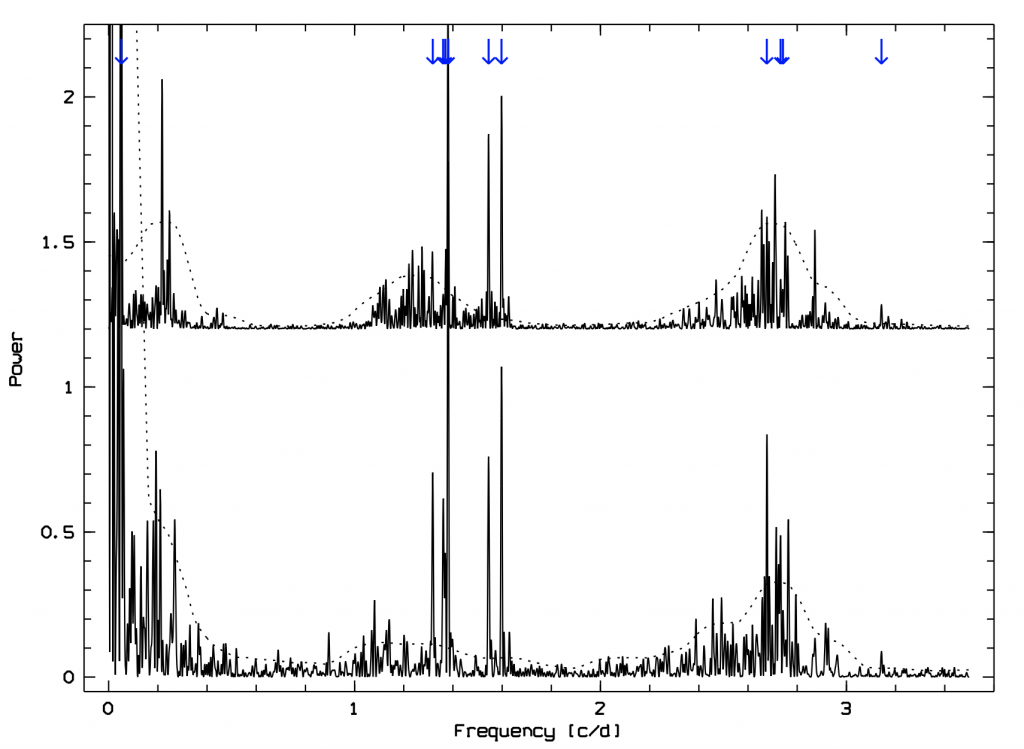 Fig. 2: BRITE frequency spectrum (in arbitrary units) of 28 Cyg. Top: 2015 (BRITE-Toronto and UniBRITE), bottom: 2016 (BRITE-Toronto). Arrows mark the identified frequencies. The dashed lines represent the local sum of mean power and 3 × σ (calculated after removal of the significant frequencies). Between 3.5 c/d and the nominal Nyquist frequency near 7.2 c/d, there is virtually no power. Frequency groupings occur at the approximate ranges 0.1-0.5 c/d, 1.0-1.7 c/d, and 2.2-3.0 c/d.

The BRITE Public Data Archive, based in Warsaw, Poland, at the Nikolaus Copernicus Astronomical Center, can be accessed at brite.camk.edu.pl/pub/index.html

The mission Wiki (including information on past, current and future fields) can be accessed at brite.craq-astro.ca/