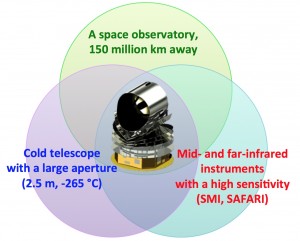 SPICA is an ESA/JAXA observatory class mission that is currently under review by ESA as part of its Cosmic Vision M5 call. SPICA will provide imaging, spectroscopic and polarimetric capabilities in the 5 to 350 μm wavelength range. SPICA features a ~2.5 m class telescope cooled to a temperature less than 8 K. The combination of a new generation of ultra-sensitive detectors and effectively zero background emission from the telescope, will allow astronomers to achieve sky-limited sensitivity over this wavelength range for the first time. SPICA will, therefore, be over two orders of magnitude more sensitive than Herschel, and will cover the full wavelength range between 5 and 350 μm, including the missing octave between 28 – 55 μm, which lies outside of both the Herschel and JWST domains. Not only will SPICA be the only observatory of its era to bridge the wavelength gap between JWST and ALMA, but it will enable unique science on galaxies, star-forming molecular clouds, and protoplanetary disks. Science that will be complementary to and not accessible with ALMA alone.

Canada was a founding member of the team that proposed the SPICA/SAFARI instrument and since 2007, with support from the CSA, Prof. David Naylor has served as the Canadian SPICA co-I, charged with establishing a potential role for Canada in this mission. Since 2007, the Lethbridge team, building on its leading role in the SPIRE instrument on Herschel, has been contributing to the SAFARI instrument design and development (e.g. building a test facility, evaluating mechanisms and metrology components for use at cryogenic temperatures, developing a SAFARI instrument simulator etc.).

As a result of these efforts a unique opportunity exists for Canada to lead the development of one of the most critical components of the SAFARI instrument, the high resolution spectrometer. The design is based on a Fourier transform spectrometer (FTS; Martin-Puplett configuration), which is not only an area of academic strength, but also a recognized signature industrial technology (ABB) in Canada. If the SPICA mission is pre-selected by ESA in the M5 call (results expected in summer 2017) and Canada decides to seize the opportunity presented by the high resolution spectrometer, it will be making one of the larger contributions of the consortium to the mission, which will in turn confer a greater scientific return to Canadian scientists. Although the SAFARI consortium constitution is still under development, the Canadian science return on investment will be at least twice that of the Herschel/SPIRE (i.e., at least 2 co-Is and 10 associate scientists). With one third of the total SPICA observing time expected to be awarded to the instrument teams (guaranteed time), the return on Canada’s investment in SPICA will be significant. While Prof. Naylor represents Canada on the SPICA/SAFARI board and oversees Canada’s technical contributions to the project, it is foreseen that the second co-I would have an astronomical focus. Dr Doug Johnstone, with support from the NRC-Herzberg Astronomy and Astrophysics, has attended several consortium meetings and is currently serving in this capacity. Several other Canadian scientists have also contributed to the development of the science case for SPICA. In total 22 scientists from across Canada supported the SPICA proposal submitted to the ESA M5 call.

SPICA as planned has three science instruments. The SMI instrument covers the 12-36 μm range with varying spectral resolution from R=50-30000. Additionally, SMI provides mid-IR imaging capabilities. The SAFARI grating spectrometer covers the range 34-230 μm at R=300 or, using the Canadian-led FTS, at R=3000-10000. Finally, an imaging polarimeter, POL, operates at 100, 200, and 350 μm. Together, these three instruments, integrated with a cold telescope, provide an extremely sensitive view of (1) the evolution of galaxies over cosmic time, (2) the formation and evolution of planetary systems (through to debris disks), and (3) the interaction between turbulence and magnetic fields in star-forming molecular clouds. Through the precise measurements of a forest of fine-structure lines and dust features, the co-evolution of AGN and galaxies will be investigated, the processes which regulate both star formation and the baryon cycle in galaxies will be explored, the composition and abundance of metals, dust, and ices over cosmic time will be delineated, and some of the earliest, most luminous galaxies in the Universe will be revealed. SPICA will provide robust gas mass estimates in the inner parts of planet-forming disks using HD and water lines, while the high spectral resolution observations will allow for measurement of the rate at which disk material is eroded due to, for example, photo-evaporation, and detailed dust features will be analysed to extract mineralogical information, including the Fe/Mg ratio in olivines and pyroxenes, in these exo-Solar systems. In between the galactic and protoplanetary disk scales, SPICA spectral maps of fine structure lines will reveal the location of shocks within star-forming molecular clouds and quantify the importance of turbulence and turbulent energy dissipation, while extremely sensitive polarimetric imaging will uncover the role of magnetic fields throughout these regions. In short, SPICA’s instrumentation and extreme sensitivity will provide the astronomical community with an entirely unique view of the mid- to far-infrared Universe.

A Brief History of SPICA and Current Mission Status

If, as anticipated, ESA selects SPICA in the M5 process then CSA funding will be required for the phase A study to raise the maturity of the high resolution spectrometer to TRL 6. Funding will also be required to enable the Canadian science team to participate in SPICA science meetings and guide the development of the science program. As a founding member of the SAFARI consortium, Canada is ideally positioned to exploit this world class facility. To date Canada’s contributions have been primarily technical in nature. Once the project is selected, however, as was the case for Herschel and Planck, it is important that funding be made available to prepare to exploit the science from this mission.

Individuals with interest in SPICA are welcome to contact David Naylor or Doug Johnstone for further information and to add their names to the ‘SPICA Supporters’ mailing list. For further details on Canada’s contributions to SPICA see: research.uleth.ca/spica/