BRITE-Constellation (where BRITE stands for BRIght Target Explorer) is a network of five nanosatellites operating in low Earth orbit, designed to explore the properties of the brightest stars in the night sky.

Figure 1 – The mission patch of the BRITE-Constellation mission.

The BRITE mission is supported by three countries — Canada, Austria and Poland — where Canadian funding comes mainly from the Canadian Space Agency (CSA) and the prime contractor is the University of Toronto Institute for Aerospace Studies – Spaceflight Laboratory (UTIAS-SFL).  The mission was planned to have 6 BRITE nanosats, a pair from each partner country, but one of the Canadian nanosats did not detach from the third stage of its launch vehicle.

Each BRITE nanosat (mass = 7 kg; dimensions 20 × 20 × 20 cm) has a 3-cm optical telescope feeding a CCD detector. The Constellation was designed to monitor photometrically through blue and red filters the brightness and temperature variations of stars generally brighter than V ~ 4 with precision, cadence and time coverage not possible from the ground.  Each BRITE instrument has an enormous field-of-view: 24° square, large enough to encompass the entire constellation of Orion (but at a resolution of only about half an arcminute per pixel). That means BRITE-Constellation can collect data on several dozens of stars simultaneously.

The sample of the apparently brightest stars in the night sky is a sample dominated by the most intrinsically luminous stars in the Galaxy: hot massive stars at all evolutionary stages, and evolved intermediate-mass stars at the very end of their nuclear-burning phases. The main goals of BRITE-Constellation are to (1) measure the frequencies of pulsations (both acoustic and gravity modes) to probe the interiors and ages of stars through asteroseismology; (2) measure the rotational modulation of stars due to star spots carried across their disks; (3) search for exoplanets through transits; and (4) obtain light curves of massive eclipsing binaries.  While goal (2) is often associated with cool solar-type stars, spots in the photospheres of luminous stars could be the sources of co-rotating interaction regions in the winds, possibly arising from magnetic subsurface convection in hot, massive stars. 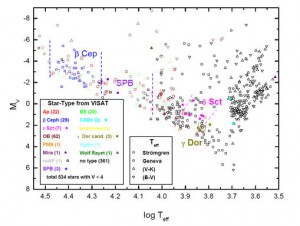 Figure 2 – Hertzsprung-Russell diagram of the stars of brightest apparent magnitude, V<4.5. These ∼ 600 stars are the primary BRITE targets.[/caption] To develop the optimum data processing and reduction strategies, a BRITE Photometry Tiger Team (PHOTT) was assembled. PHOTT explored and compared various pipelines and ways to minimise data artifacts. To extract the maximum scientific value from the reduced BRITE photometry, the BRITE Ground-Based Observations Team (GBOT) organizes ground-based observing campaigns, primarily high-resolution, high-S/N spectroscopy of BRITE targets. A detailed overview of the scientific motivation of the mission, and technical aspects of the system, are provided by Weiss et al. (2015, PASP 126, 573).

Five of the planned six BRITE nanosats are currently operating in low-altitude (600-800 km) orbits. The first pair of BRITE nanosats (from Austria) were launched on 25 Feb 2013, and the Canadian BRITEs were launched in August 2014 aboard a Russian rocket. The sixth satellite currently remains unusable in a higher elliptical orbit due to a malfunction in the release mechanism of the Russian rocket third stage.

A new ground station capability has been developed at UBC and will soon come on-line, permitting greater data downlink capability. 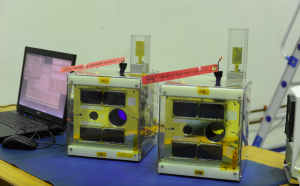 Figure 3 – The two Canadian BRITE nanosatellites (named “BRITE-Montreal”, blue filter and “BRITE-Toronto”, red filter), at UTIAS-SFL prior to shipment in 2014.

Ten data releases to BRITE Target PIs have occurred so far. The first was a set of science commissioning data, including about 5 months of quasi-continuous observation of 15 stars in Orion. Subsequent releases were 6-month campaigns of fields in Centaurus and Lupus (30 stars), Sagittarius (18 stars), Cygnus (37 stars), and Perseus (31 stars). Orion was observed again. Most recently, a field in Vela and Puppis was observed (20 stars). Data from the recently-completed Scorpius (26 stars), Cygnus-II (34 stars) and Cassiopeia/Cepheus (25 stars) fields have just been released.

The first BRITE science results have been accepted in refereed journals: Three science papers by Weiss et al. on the pulsating magnetic star alpha Cir, by Baade et al. on the short-term variability and mass loss of the Be stars mu and eta Cen, and by Pigulski et al. on the triple system beta Cen (a complex system containing at least one beta Cep pulsator) have been published together in issue 588 of Astronomy and Astrophysics.

The first BRITE science conference, “Science with BRITE Constellation: Initial Results” took place during 14 – 18 September 2015 in Gdansk Sobieszewo, Poland.  Presentations authorised for public release are available on the conference website. The next BRITE science workshop is planned from 22-26 August in Innsbruck, Austria.

A workshop related to a large-scale spectropolarimetric survey of BRITE targets was held at the Meudon
Observatory on October 26-30, with 19 participants. The BRITE spectropolarimetric survey is proceeding nominally, with expected completion in March 2016. Magnetic field has been detected in 47 stars so far, and follow-up observations are being acquired or planned for many of them. Two papers have already been published (Shultz et al. 2015, Neiner et al. 2015) and many others are in preparation. A second BRITE spectropolarimetric workshop will be organized from 14-18 November 2016 at the same location.

Figure 4 – Light curves of the eclipsing binary V Pup, observed as part of the BRITE Vela/Puppis field. Shown here is a 5-day interval of the BRITE-Austria (blue) and BRITE-Toronto (red) observations.

Setting priorities on BRITE targets and science goals was overseen by BEST, with input from the BRITE International Science Advisory Team (BIAST), consisting of 130 astronomers around the globe. Interested in joining BIAST, to participate in data analysis, and receive monthly mission updates?  Please contact BEST through Gregg Wade (wade-g@rmc.ca).