BRITE-Constellation is an international space astronomy mission consisting of a fleet of 20x20x20 cm nanosatellites dedicated to precision optical photometry of bright stars in two photometric colours. The mission continues in full science operations, with 45 datasets available in the public domain from the BRITE public archive. As of April of 2020, all data is made public as soon as decorrelation is complete, with no proprietary period.

There are five BRITE satellites in the Constellation, which work together to obtain well-sampled, long term continuous (~6 months) light curves in both red and blue band passes across a variety of sky fields.

As this issue of Cassiopeia went to press, the assignments of the BRITE nanosats was:

The BRITE Constellation observing program is currently set through November of 2021. Details of the observing plan are available on the BRITE photometry Wiki page.

This study investigates the pulsational and magnetic field properties of β Cas, as well as the star’s apparent fundamental parameters and chemical abundances.

Based on photometric time series obtained from three different space missions (BRITE-Constellation, SMEI, and TESS), we conduct a frequency analysis and investigate the stability of the pulsation amplitudes over four years of observations. We investigate the presence of a magnetic field and its properties using spectropolarimetric observations taken with the Narval instrument by applying the least-squares deconvolution and Zeeman-Doppler imaging techniques.

The star β Cas shows only three independent p-mode frequencies down to the few ppm-level; its highest amplitude frequency is suggested to be an n = 3, ℓ = 2, m = 0 mode. Its magnetic field structure is quite complex and almost certainly of a dynamo origin. The atmosphere of β Cas is slightly deficient in iron peak elements and slightly overabundant in C, O, and heavier elements.

Atypically for δ Scuti stars, we can only detect three pulsation modes down to exceptionally low noise levels for β Cas. The star is also one of very few δ Scuti pulsators known to date to show a measurable magnetic field and the first δ Scuti star with a dynamo magnetic field. These characteristics make β Cas an interesting target for future studies of dynamo processes in the thin convective envelopes of F-type stars, the transition region between fossil and dynamo fields, and the interaction between pulsations and magnetic field. 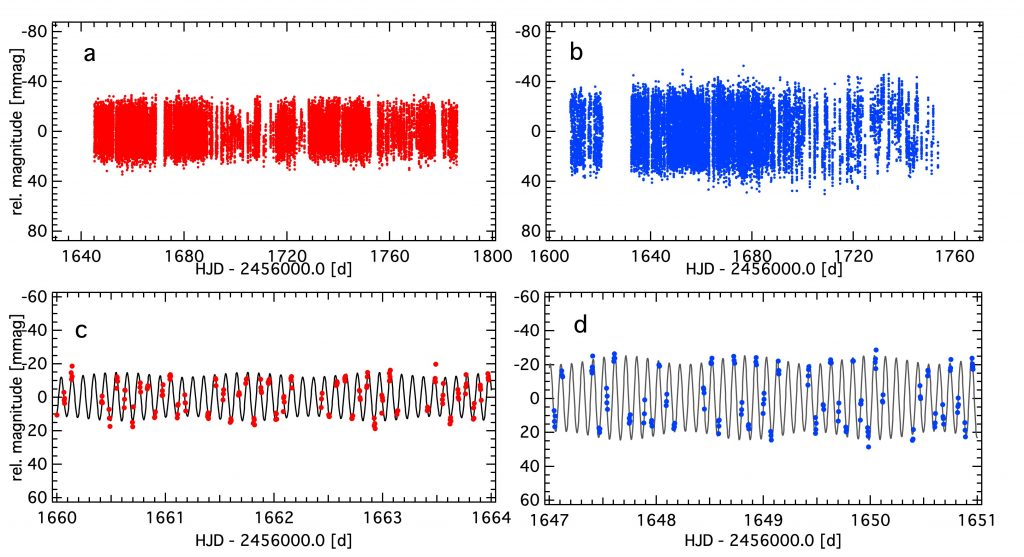 The BRITE team did not host any conferences this year. The proceedings from the 2019 conference “Stars and their Variability Observed from Space” has now been published and all papers are available at brite.camk.edu.pl/pub/index.html.

The mission Wiki (including information on past, current and future fields) can be accessed here.