Each month, the GSC highlights the work of an outstanding Canadian graduate student by sharing their work with our members. Since the launch in February of 2020, we have highlighted four students from around the country. 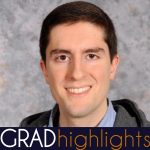 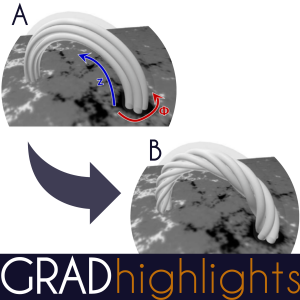 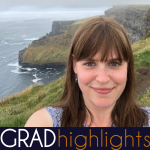 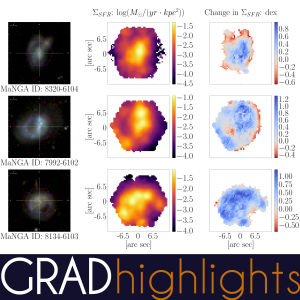 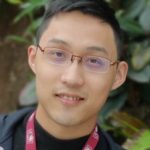 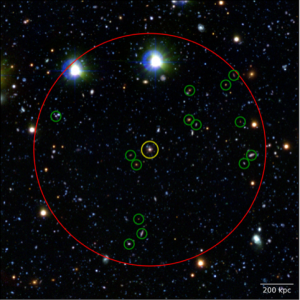 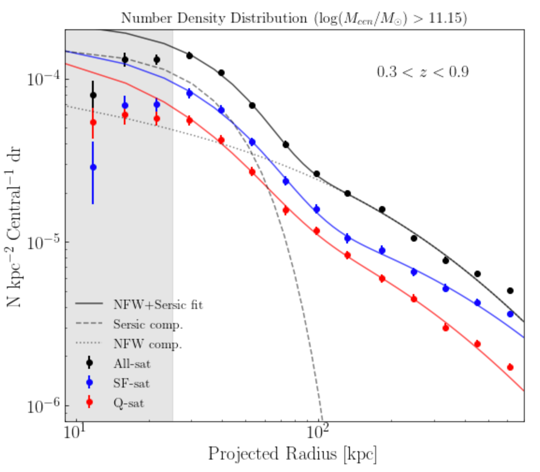 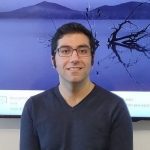 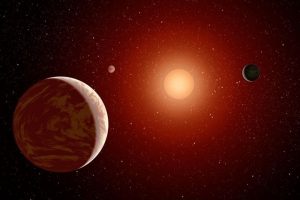 Canadians are responsible for CO2 emissions that are more than three times the annual global average of 4.8 tonnes per capita [1]. Most Canadian astronomers’ professional carbon footprint is dominated by air travel, and unlike telescope construction or rocket launches, flights — especially to conferences — are the immediate product of our individual choices. To reduce the environmental costs of our profession, we need real and desirable alternatives to jetting around to distant conferences.

Back in February, CASCA’s new Sustainability Committee was planning a virtual session for this year’s Annual General Meeting. But when the York meeting was cancelled due to the pandemic, an Online Organizing Committee was quickly assembled to plan a fully virtual conference. May’s online AGM, which was based around electronic posters and pre-recorded prize talks and community updates, drew 336 participants. We estimate that if everyone who participated from outside Ontario had flown in, the equivalent CO2 emissions would have been about 130 tonnes. (This may be an overestimate, as 43 respondents indicated on an exit survey that they would not have attended the in-person conference.)

The 2020 AGM was an interesting experiment, but how do we move forward? We aren’t advocating that all future conferences be completely virtual; we too would miss interacting with colleagues in person from time to time! Instead we would like to see the virtual options enhanced. We envision a future in which one would travel only to nearby conferences, and join remotely in most other cases. In the AGM exit survey (40% participation), about 60% of respondents reported missing the interactions that occur in person. Clearly, there is much work to be done to find effective and enjoyable ways to interact online with colleagues, but with improving text, video, and virtual reality options we believe this is possible. For instance, one could consider simultaneous physical meeting `hubs’ connected by a virtual link. Taking these points into consideration, the 2021 AGM organizers are already planning both in-person and remote ways to participate.

We encourage all astronomers to carefully consider how to minimize the impact of their research-related travel. In addition to being more selective about which conferences and meetings to attend in person, we recommend purchasing carbon offsets for those times when travel is needed. Not all institutions allow offsets to be reimbursed, and current NSERC spending rules for Discovery grants do not. Persistent advocacy is needed to change these policies, something which the Sustainability Committee will pursue. It is time for us to consider the environmental impact of our research, take stock of our own emissions, and plan a professional carbon budget in the same way that we plan a financial budget when managing our research grants.

Canada declared a national climate emergency a year ago and astronomy, like every profession, is beginning to face the challenge posed by the global climate crisis.  The problem is both an ethical and a practical one.  Ethically, we must recognize that the impacts of global heating – to which our professional activities contribute – will be the worst for those who have contributed the least to the problem:  the poor and marginalized in our own society, the Global South, and future generations worldwide.  Practically, we must find ways to live up to the commitments set out in the Paris Agreement: to cut greenhouse gas emissions in half by 2030, and reach net-zero by 2050 in order to avert irreversible and catastrophic climate change (ipcc).

As members of CASCA’s new ad-hoc Sustainability Committee, our mandate is to encourage all Canadian astronomers to evaluate the environmental impacts of the practices of astronomy; to work with you on reducing them; and to provide sustainability-related resources for those engaged in teaching and outreach.  The Committee was created by the CASCA Board in early 2020, in response to the LRP white paper Astronomy in a Low-Carbon Future.  Its membership was drawn initially from that paper’s authors, with those involved in organizing the online version of the 2020 Annual General Meeting joining shortly thereafter.

Now that the online AGM is over, we will work to:

We’re looking forward to engaging with you!  If you would like to get involved and join our roughly bi-monthly virtual meetings, please contact the committee chair, Chris Matzner.

At the time of writing, I have been CASCA President for exactly one week! It is a role that I am meeting with both excitement and humility – the outgoing President, Rob Thacker, carried out his role with the utmost dedication, tirelessly working for our community and expertly navigating us through some choppy waters. So, whilst I am excited to receive the Presidential baton and continue the good work, Rob has left some rather big shoes to fill. Thank you Rob, on behalf of the Society, the Board and myself for your hard work to make the very best of our community.

The Board has some other new faces as well – we welcome Laura Parker (McMaster) and Julie Hlavacek-Larrondo (Montreal) as Directors, replacing Suresh Sivanandam and Rene Doyon. Thank you to Suresh and Rene for your valued service. The new Vice-President is Samar Safi-Harb (Manitoba), with whom I have worked in several capacities in recent years and am delighted to have as my wing-(wo)man. [As an aside, our Board is now 6/9 female!]. And finally, Bob Abraham completes his six year marathon on the Executive, having rotated through the Vice-President’s position, then to President and then to past-President. Bob – you have been an inspiration in the community, bringing wit and wisdom wherever you go. Thank you.

Since the last Newsletter in March, I think that there is not a one amongst us who hasn’t had their personal and professional lives turned upside-down by COVID-19. However, in times of crisis, our true natures rise to the fore and I am proud and inspired to live and work in a society (and Society!) that is characterized by compassion, community-mindedness and creativity. Across Canada, nightly serenades to front line workers, hearts in windows, poetry on lampposts and neighbourhood `caremongering’ have become the norm. We can be very proud that astronomers are amongst those in Canada who are seeking ways to support both professionals and the public alike in these challenging times. I wanted to highlight two examples of this, whose target audiences differ, but whose goals are united in serving communities whose regular ways of engaging have been interrupted by COVID.

First, under the ever-energetic leadership of Julie Bolduc-Duval, Discover the Universe (DU) launched a daily podcast (“astro-at-home”) aimed at children aged 8-12, delivered in both English and French, covering subjects as diverse as space robotics and the search for alien life. Many of us have school-aged children who have been home for months, adding another full time job to our lives (oh, the fun of having to retreat to a closet for a telecon!). Initiatives such as astro-at-home have not only been vital in keeping our young ones stimulated and educated, but is also a shining example of creating an opportunity out of a crisis. The astro-at-home podcasts are being delivered by a diverse crew of passionate communicators, who will surely be role models for the thousands of viewers that astro-at-home has attracted. My daughter and I were certainly amongst those so inspired.

A complementary initiative is CANVAS – the CANadian Virtual Astronomy Seminars. For researchers, the summer months normally mark the peak of the conference season, as we make our international pilgrimages to share the latest astronomical discoveries. Conference attendance is particularly important for our junior researchers, not only to advertise their work, but also to learn from others. Current travel bans obviously erase this opportunity. Spear-headed by Dennis Crabtree (NRC Herzberg), CANVAS aims to bring research talks to our home offices, by coordinating a national seminar program. By recording these presentations, which will have contributions from graduate students through professors alike, CANVAS will also provide a lasting legacy and enable research communication across the country, benefitting in particular smaller or more geographically remote centres of research. I hope that in the future CANVAS will be even more ambitious and recruit speakers from around the world – what a wonderful way to maximize scientific communication at low carbon cost.

As a society, we experienced a major milestone with this year’s AGM, the first to be hosted entirely virtually. Under the chairmanship of Michael De Robertis, some two years-worth of planning and hard work had already been invested by the York University team to host CASCA 2020. The decision to move the AGM online was made in mid-March, leaving the organizing committee a scant two months to overhaul the meeting. The Local Organizing Committee (LOC) was quickly re-shuffled to an Online Organizing Committee (OOC): Elaina Hyde, Paul Delaney, Michael De Robertis, June Parsons, Sharon Morsink, Carter Rhea, Dennis Crabtree, Chris Matzner, Maan Hani, James Taylor and Rob Thacker. It was truly a mammoth task to bring everything together on such a short timescale, but their Herculean efforts led to an AGM to be proud of – an extremely well attended meeting offered at low cost, with low carbon footprint and featuring several novel components such as iPosters, a Youtube channel for all of the prize talks and conference photos via Zoom. It may also be the only time you will get to see astronomers doing back-flips on the beach. Although CASCA 2020 was a virtual meeting by necessity, it was an excellent opportunity to experiment with technologies that might be blended with future meetings. Exploring such options is one of the primary mandates of CASCA’s newly minted Sustainability Committee (chaired by Chris Matzner). Whether it be virtual, or in person, I look forward to seeing you all next May in Penticton, where CASCA 2021 will be co-hosted by DRAO and UBC.

Despite all the upheaval of the past months, one effort that is seemingly unperturbed in its forward progress is the development of our Long Range Plan (LRP). Under the deft and indefatigable leadership of co-chairs Pauline Barmby (Western) and Bryan Gaensler (Toronto/Dunlap) a draft of the principal content was circulated to the Society in mid-May and discussed at a well-attended AGM session. The scope of the LRP is impressive, tackling not only research-driven topics, such as observatory facilities, supercomputing and data-management, but with a holistic perspective of our professional landscape. Equity and diversity, education and public outreach, funding and governance are all tackled, as well as recommendations pertaining to ethics, sustainability and indigenous matters. A reminder that the CASCA committee reports submitted for the AGM are publicly available here, and cover many of these topics, including the latest updates from facilities such as TMT and SKA. For now, Coalition lobbying activities are dormant, and a return to such activities is likely to be staged and require both flexibility and opportunism. But with the LRP on track for completion in the Fall, I am confident that whenever the opportunities do re-open, we will be ready for them.

Desmond Cole: ‘Canada insists on being surprised by its own racism’

Letters to America from Black Canadians